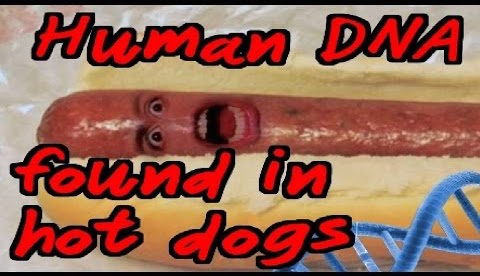 Gross, gross, gross!!! Just when you thought the quality of our food in America could not get any worse, a new study comes out proving us wrong.

American hot dogs are often greeted with deep suspicion by almost everyone that eats them, with the nutritional content assumed to be as low as the mystery of their contents is high.

Nevertheless, millions are consumed in the United States, with some figures suggesting at least 1 billion packs are sold every single year. Well, there’s some bad news for hot dog connoisseurs today: Namely, human DNA has been found in 2% of the samples. In vegetarian hot dogs, human DNA was found in two thirds of them, as reported by USA Today.

Human DNA might not mean there are chunks of humans in these hot dogs, at least we hope not anyway. The report does not go into any detail as to what “human DNA” could actually mean.

This wasn’t the only significant finding of the report: 10% of the vegetarian hot dogs contained meat, entirely defeating their purpose. Also, 14.4% of all hotdogs were problematic in one way or another, such as having so-called “hygienic” issues – meaning that a “non-harmful contaminant” has been inadvertently “introduced” to the hot dog – or “substitution issues,” meaning ingredients turned up that weren’t on the label.

For example, in a variety of products, chicken, beef, turkey and Lamb appeared specifically where they were not supposed to. Two thirds of all hygiene issues were reported to be in the vegetarian products.

The research has been done by clear foods, an organization that specializes in “genomic technology,” basically breaking down the molecular components of something and assessing where each component originally came from. By looking at 345 hot dogs and sausages from 75 different brands sold in 10 different food retailers, the company came to their conclusions. The report points out that “pork is a particularly unwelcome substitution in any food” when the religious backgrounds of some consumers are taken into account, finding that pork turned up erroneously and 3% of its samples, mainly in chicken and turkey sausages.

The online report concludes with this philanthropic sentiment: “While some of these substitutions, hygienic issues, other variances, or off label ingredients may be permitted by the FDA, our scientific disclosure allows you, as the consumer, to decide whether the variance or problems meet your personal standard in your buying decision.”