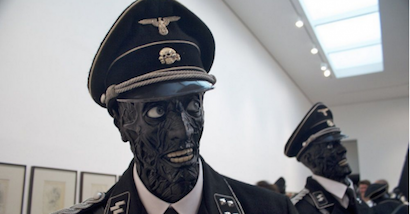 In an attempt to fuel its youthful but increasingly exhausted fighting force during World War II, the Nazis turned to addictive and potentially dangerous substances, including a form of what is known today as the illegal drug methamphetamine.

The Daily Beast’s Abby Haglage writes that Ohler’s German language book The Total Rush dug through German and American records for years to reveal more about Hitler’s “drug-induced genocide.” Ohler found that Nazi soldiers were brutally efficient raging zombies and part because they were cooking their brains with “a pill form of crystal meth, called Purvitin.”

Initially marketed in the late 1930s as an over-the-counter alternative to coffee, Purvitin “gave the Nazis the alertness they needed to remain awake for hours.”

This narcotic fueled side of the Nazi war effort is eliminated in letters sent home by Nazi soldiers such as Heinrich Boll, a famous German author awarded the Nobel Prize for literature in 1972.

Meth was not the only addictive substance used by Nazi troops to perform everyday duties. Alcohol abuse was also prevalent and even encouraged among the German military during the same time period.

Today, the popularity of crystal meth use is growing in Germany, and the drugs prevalence increased significantly in 2012. The drug has also become an issue across the border in the Czech Republic, where it is cooked in small kitchen labs and has proved popular among partiers.