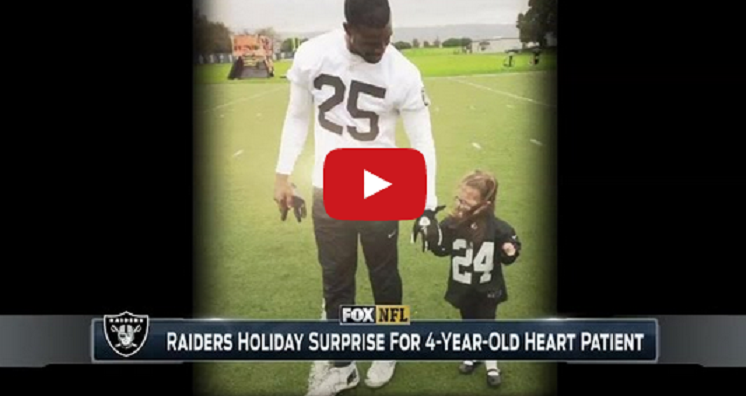 A little positivity goes a long way! Finally, some good news from someone in the NFL. Fox Sports Jay Glazer connected the Oakland Raiders with the family of four-year-old Eva Urerra of Las Vegas. Ava has a heart condition that Glazer says is like having “half a heart.” The result was magnificent.

The Raiders offered young Ava, who has undergone 14 different procedures on her heart, the opportunity to “Capain” the team, and gave her signed gear and toys throughout her visit with the team.

Offensive lineman Menelik Watson, so touched by Ava’s condition, donated his entire game check, $18,000, to help with the expenses of Ava’s family.

“Sir, I would like to make sure Ava has the greatest holiday,” Watson told Ava’s father, according to Glaser. “Here is my game check.”

It’s not a small gesture, particularly from a second-year player who is in a profession whose careers can be measured in just a handful of years. NFL players are paid in 17 installments over the course of the year, not 52, so Watson just donated almost 6% of his entire game salary. Great gestures all the way around!