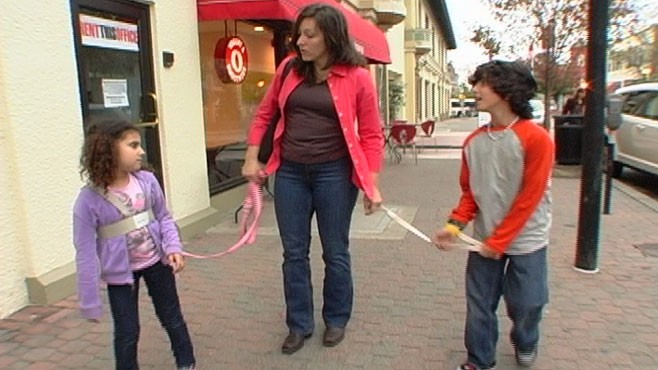 SAFR Plans To Lobby For Mandatory ‘Leash Law’ For Children Under 13 Years Of Age.

Last week, Montgomery County Maryland Child Protective Services began an investigation of a couple who allowed their 10 and 6 year-old children to walk by themselves to the local park, library, and 7-11 store.  During the course of their investigation so far, CPS has threatened to remove the children if the parents continue the use of “free-range” parenting styles.

Montgomery County CPS has declined to comment the active case; however, others in the community are speaking out.

“It just goes to show we need more restrictions where child freedoms are at play,” states Mr. Nozmann, a former Child Catcher from the country of Vulgaria, and founder of the Society Against Free-Rangers (SAFR).  “I’ve spoken with officials many times about the evils of children running free while learning to handle the world as it exists today.  By allowing kids to explore their environment, we put them at risk from would-be abductors, unscrupulous salesmen, and sparkly vampires.”

To address their concerns, SAFR plans to lobby city and county governments to establish leash laws for children under 13 years of age. “Tethering children to a responsible grown-up is the only way to ensure their absolute safety.  Kids don’t understand how many dangers lurk on every corner and how they need to fear each step.”

According to research provided by CNN, out of 797,500 reported missing children in 2002, only 115 cases were listed as stranger abductions.  The most commonly reported statistic is children are over 75% more likely to be abducted by a family member or acquaintance.

When asked if tethering a child to a parent or acquaintance meant leashing the child to the person most likely to abduct them, Mr. Nozmann responded, “Ah…well?”

When faced with further information that childhood independence leads to increased confidence, better coping skills, less anxiety, and better life skills, Mr. Nozmann replied, “There are children here somewhere. I can smell them.”