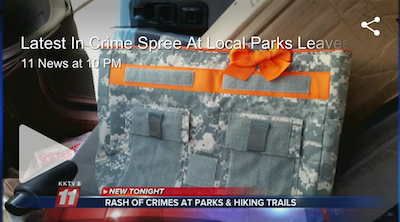 This Latest Crime Spree Left A Fallen Soldiers Wife In Tears – What Was Stolen Will Anger You!

Shea Zupan feels like she lost her fiancé twice. “When he passed away, I sent off Army uniforms to have purses made for me and his family.”

Zupan’s Fiancé died just a few months ago, and the loss is still fresh. Carrying her purse made from parts of his military uniform – his rank, his flag, a patch from Iraq, lets Zupan feel that in some way he’s still with her.

During an outing with her dog at Bear Creek dog park Thursday, someone broke into her car and stole the precious item.

“I feel like I have lost him, it hurts because I can’t get any piece of him back besides that bag,” Zupan said.