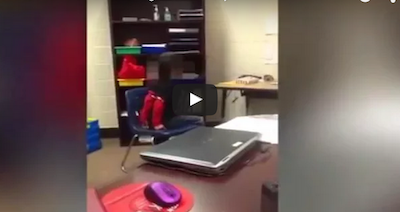 A new lawsuit alleges that a school cop in Kentucky violated the civil rights of this boy and another young student. A Kentucky police officer has been named in a federal lawsuit filed Monday alleging that he illegally handcuffed and restrained two elementary school students with disabilities.

According to the lawsuit, Kenton County Deputy Sheriff Kevin Sumner, a school resource officer assigned to the Covington Independent Public School District, used handcuffs last fall to restrain an eight-year-old boy and a nine-year-old girl, placing the cuffs on their biceps behind their backs.

Sumner allegedly did so after the students fail to comply with directions given by school authorities. Both students had previously been diagnosed with attention deficit hyperactivity disorder, and the boy had also been diagnosed with posttraumatic stress disorder, according to the lawsuit, which was filed on behalf of the students by the Children’s Law Center in Kentucky and the American Civil Liberties Union. The suit alleges Sumner violated the students civil rights and the Americans with Disabilities Act.