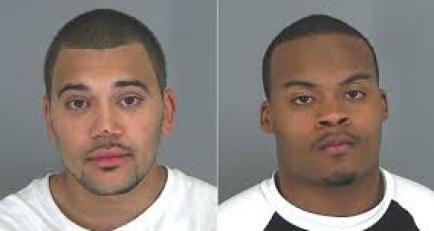 Two Men Arrested For Sagging Pants In A Carolina Waffle House. Two men were charged with disorderly conduct in a South Carolina waffle house after a security guard asked them to pull their pants up or leave the restaurant. They entered the waffle house with their pants sagging so low you could see their underwear, and apparently nobody wanted to look at that while they were eating.

According to The Smoking Gun, Donovan Johnson and Andrew Gehring, both at age 22, began cursing and making a scene when the security guard approached them and made his request for them to pull their pants up. He also gave them the option to leave the restaurant if they did not want to comply. Police were called out, but the two young men still continued to be belligerent as the police tried to arrange a ride home for them.

According to a report from the smoking gun both men claim to be Wofford students and that they were just out to have some fun. However, the website The Smoking Gun reports that Wofford college in Spartanburg had expelled Gehring after he was arrested for grand larceny and burglary in 2011.