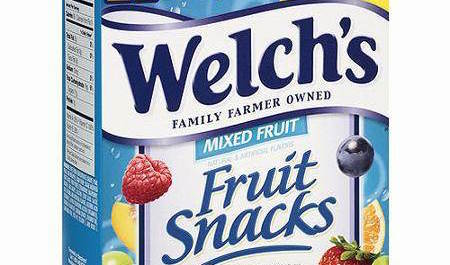 Today – It probably doesn’t surprise you to learn that fruit snacks aren’t healthy. At some point in your late-night pantry rummaging, you must have at least had a fleeting thought that these too delicious candies were only dubiously related to the fruit they sort of resemble.

There’s some actual fruit involved, yes. Sure. A quick scan of the label tells us that these contain “fruit purée” (grape, peach, orange, strawberry, and raspberry). But that’s pretty much where the “fruit” part ends and the “other stuff” part begins. The list is peppered with corn syrup, gelatin, modified cornstarch, and a host of added colors.

If that’s not enough sugar for you, there’s also….. “sugar.” And don’t forget the ever questionable “natural and artificial flavors” listing.

But our amateur sugar sleuthing is the least of these fruit snack manufacturer’s worries. A class action lawsuit filed Friday, September 26, claiming that the manufacturer of Welch’s Fruit Snacks, Promotion in Motion, have been deliberately fooling consumers with their fruity, colorful, delicious marketing.

The plaintiffs believe that the “vibrantly depicted” fruits on the front label of the snacks are misleading and that they are actually “no more healthful than candy.” The suit itself centers on the “jellybean rule,” which is the same statute that got vitamin water in trouble a few years back. It essentially states that you can’t simply fortify a food product “such as candies and carbonated beverages” with nutrients and additives, call it a healthy snack, and market it as such. It’s actually got to be healthy to begin with.

The plaintiffs add that “Welch Foods has deceived shoppers by engaging in a deceptive marketing campaign to convince consumers that Welch’s Fruit Snacks contain significant amounts of the actual fruit shown in the marketing and on the labeling of the products, were nutritious and healthful to consumers, and were more healthful than similar products.”

Meanwhile, Promotion in Motion has released a statement clearing that their “labeling is truthful and gives consumers the information they need to make informed decisions.”